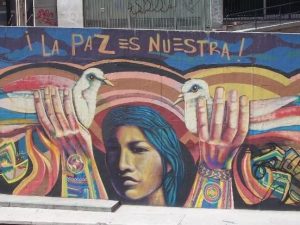 “Peace is ours”. Mural art, Bogotá

Colombia has a long history of violent social and political conflict, and also a long tradition of peace initiatives. After years of negotiations, in 2016 the Government concluded a peace agreement with the revolutionary guerrilla movement FARC, which entered a phase of disarmament, demobilization and reintegration to civil life. But after decades of fighting, violence has permeated all layers of society, particularly in the poor and remote rural areas. 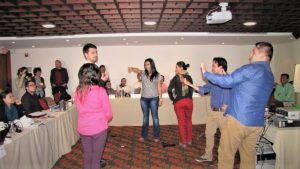 LASO organized with the Colombian Ministry of Culture a Training on “Local Cultural Development for reconciliation in a post-conflict scenario”, for the team of Regional Culture Promoters who are the reach-out of the Ministry towards such deprived and conflict-ridden areas.They came from all regions in the country: the centre, the Northeast, the Pacific, the Plains, the coffee zone, the Caribbean coast, the South and the Amazon.

The programme was a dazzling and sometimes highly emotional tour on the possibilities of local culture work to overcome distrust and enhance social cohesion and peaceful coexistence. Examples were drawn from all over Colombia and from Central America, Africa and the Netherlands.