During 2020, LASO coordinated a project together with the Institute of Comparative Studies in Penal Law Sciences of Guatemala (ICCPG) and the Free University of Amsterdam (VU), with financial support from NUFFIC, aiming to promote Human Rights, in particular women’s rights, in this Central American country.

This high-level academic programme had the participation of almost thirty professional staff of the ICCPG and of an European and Latin American teaching team. Due to COVID conditions, the course design was drastically adapted, and it was wholly conducted online, in a different format, with more than 20 interactive sessions, besides group work and individual research. The course was a definite success.

Guatemala, like all of Central America, is a complex and conflictive land, where human rights in general, and especially those of women, indigenous peoples, migrants, or LGTBI, are violated on a daily basis. This project prepared and updated the Institute personnel to analyze these situations and to offer paths for prevention.

The next challenge for the ICCPG is to extend this knowledge and practices to the country’s Departments and rural regions, where conditions are still more difficult than in Guatemala City. LASO will keep supporting the Institute in these new initiatives. 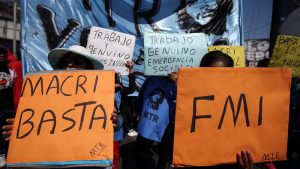 In Ecuador, great social, union and indigenous mobilizations occupied the capital city, Quito, and forced the Government of Lenin Moreno to retreat to Guayaquil and subsequently to derogue the economic policies ordered by the International Monetary Fund: especially, the “rationalization” of fuel prices raising them to international market levels.

In Chile, for the first time in a generation, the streets of Santiago (those “broad avenues for free people” of Salvador Allende’s final words in 1973) filled with the hundreds of thousands who never saw their part of the economic miracle. Here too the price of transportation was the igniting spark. The Chilean armed forces showed how little they have changed since the dictatorship, and left at least 18 dead and many wounded among the protesting population. 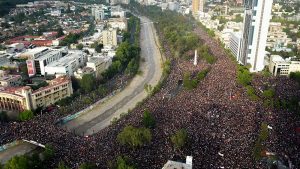 In Colombia, students keep marching through the cities, claiming Government budget for education and justice for all the social activists and environmentalists who have been murdered in the country.And Bolivia confirmed the democratic mandate of Evo Morales, who governs since 2006 and still holds a clear majority vote. His opposing candidate, Carlos Mesa, precisely was the one to be ousted from power by the social movements, in the conflict over the national gas resources.

However, on Sunday, Nov. 10, Evo resigned from power, under heavy internal and external political pressure, and Bolivia rides into an uncertain future. 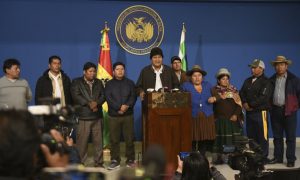 Over all of Latin America, the reasons for political struggle are the same as ever: natural resources, unequal development, social injustice, persecution. But America is awake.

Communication media play a key role in the defence of peace and human rights. LASO participates in research on the treatment of these issues by large press media in Colombia and the way they influence public opinion on the armed conflict in the country.

Keti Koti – “the Chains Cut” – is the yearly 1 July memorial and celebration of slavery and its abolition in The Netherlands and its colonial belongings worldwide. Specially the Afro-Caribbean descendants of enslaved persons in Surinam and the Dutch Antilles, together with people from all over the world, join and share in multiple festivities and ceremonies, to honour their forebears, to denounce the unjustices done to them, to celebrate life and liberty, and to create new human relationships based on togetherness and diversity. Historical memory is intimately linked to matters of peace, human rights and social cohesion in the XXI Century.

Since 2002, the national Keti Koti celebrations in Amsterdam have steadily grew up to a major festival on July 1 in the park around the Memorial Monument, and a constellation of smaller and very diverse celebrations, rituals, marches and artistic activities during the whole month of June, named as “Keti Koti Month”. These become the focus for debate on crucial themes as racism and integration, migration and refuge, employment and urban culture, multicultures and globalization. In 2018 the movement is exploring a new dream: the creation of a permanent National Slavery Museum.

LASO documents and participates in this cultural and political process, offering a Latin American as well as global and local perspectives. We work with participatory and qualitative research modes, producing visual and textual presentations, and supporting individuals and organizations in Amsterdam. Also we stimulate contact with social organizations and researchers in Latin America, the Caribbean, Europe and Africa, such as the Docklands Museum in London. We invite interested people worldwide to join us in this exchange.

The European Commission has launched a new multiple Framework Contract to attract expertise for all its international cooperation programmes: SIEA-2018 (Services for Implementation of External Aid). The SIEA FWC is divided into 6 Lots covering all relevant specialties. Experts are recruited through international consortia. LASO welcomes this new FWC and mediates between experts and companies to achieve the best quality of working teams for every assignment.